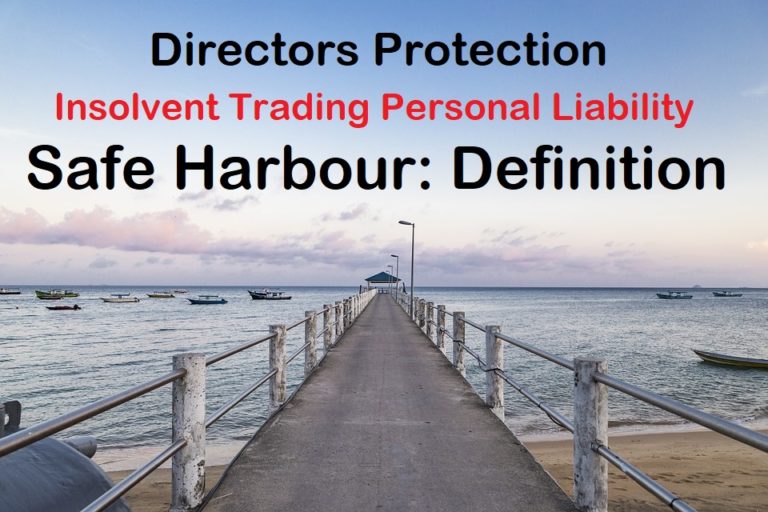 What IS a ‘safe harbour’, exactly? How do we arrive at a safe harbour definition?

How does it affect you as a business owner? And what do you need to do—if anything—in relation to it?

This article explains everything you need to know.

The ‘Safe from Insolvency’ Harbour

The term ‘safe harbour’ refers to legislation under section 588GA of the Corporations Act 2001 that protects Australian company directors from personal legal liability for insolvent trading while they undertake a business restructuring and turnaround (see our business turnaround definition). It is a legal safe harbour, in that regard (reduce or eliminate legal or regulatory liability in certain situations as long as certain conditions are met).

The ‘COVID Safe Harbour‘ was the Government’s initiative to assist the economy following the pandemic – temporary relief being granted to directors from insolvent trading personal liability for 6 months from March to September 2020 (included debts incurred in the ordinary course of trading a company, see section 588GAAA). When coupled with the deadline for responding to a statutory demand being extended to 6 months, this resulted in a sharp drop in the number of predicted formal insolvency appointments (external administrations).

Australia’s ‘Business Judgement Rule’ is also considered to be a ‘safe harbour‘ (of sorts) – it can defend directors against a claim they have breached their statutory and common law duty of care and diligence. The Business Judgement Rule was proposed in 2011 by Ryan Purslowe as having potential for ‘extension’ so as to include an ‘insolvency safe harbour’ for directors (which is effective under section 588GA).

The ‘insolvency safe harbour for directors‘ legislation was introduced in Australia in September 2017 and was intended to foster innovation and entrepreneurship. The ‘safe harbour’ gives company directors the time to work out how they can restore a company’s solvency, without fear of being held directly and personally responsible for any losses made during the restructuring and turnaround process.

Within the National Innovation and Science Agenda, a proposals paper was released on measures to improve Australia’s insolvency laws by introducing this ‘safe harbour for directors’, and changing the operation of ‘ipso facto’ clauses.

Before its introduction, the Federal Government felt that company directors weren’t getting the opportunity to work hard enough to turn their companies around effectively (prematurely turning to the advice of registered liquidators). Instead, directors would opt immediately for liquidation or voluntary administration (provided they possessed sufficient funds, considering a small voluntary administration has been estimated at $97,000 per Mark Wellard 2014). Directors were forced to head down this route because if they didn’t, they would be held personally accountable for losses.

The ‘safe harbour’ gives directors an alternative to voluntary administration, and the time within which to turn a company around or undertake an informal restructure (a prepack or legitimate phoenix).

In summary, the Safe Harbour:

Beyond the definition: How does Safe Harbour affect you?

The Safe Harbour legislation is not available to to every director automatically. Pending certain conditions, the safe harbour criteria applies only if a director develops a strategy that will provide a better outcome for the company than the immediate appointment of an administrator.

Granted, the definition of ‘better outcome’ is extremely broad.

At TurnAbout AU, we take it to mean that the outcome is better than voluntary administration or liquidation —in potentially every sense—for the:

Importantly, a director’s plan doesn’t have to be successful in order for him or her to be protected from liability for that period of time.

The critical factor is (a) that a director sought a better outcome; and (b) that the outcome was still reasonably likely to be better than appointing an administrator or liquidator.

There are five minimum elements that a court may consider

To be protected from personal liability for debts incurred by the company:

To be able to access safe harbour provisions, you must seek the advice of an appropriately qualified advisor

The engagement of an “appropriately qualified entity” (under section 588GA) will be a key factor for courts when determining whether directors are able to rely on safe harbour protection. The team at TurnAbout AU is trained and qualified in advising businesses about the best course of action during a crisis.

With background experience & qualifications in insolvency restructuring and turnaround, we understand all of the options available to you, and are your best advisors for a safe harbour turnaround or a safe harbour restructure. This is important, as the new legislation surrounding illegal phoenix activity could render you liable for criminal and civil penalties (one critic of the safe harbour is Helen Anderson, who is concerned that unscrupulous pre-insolvency advisors will use safe harbour as a guise to undertake illegal phoenix activity – see the paper ‘Shelter from the Storm‘).

To learn more and to ascertain whether you are eligible to access the insolvency safe harbour, please contact us.